The World That I Envision as a Vehicle Engineer: Learning from the 107 Victims of the Train Crash

mobility
Top>The World That I Envision as a Vehicle Engineer: Learning from the 107 Victims of the Train Crash

My name is Umino (@umikokun), and I’m in charge of PR for mercari R4D. I used to work as a producer creating media for female, but this past February, I came to the realization that I wanted to help show people the potential of technology, and I decided to join R4D.

This entry is the first in a series of posts where I’ll introduce our different R4D researchers in order to give readers a better idea of who we are as a team. 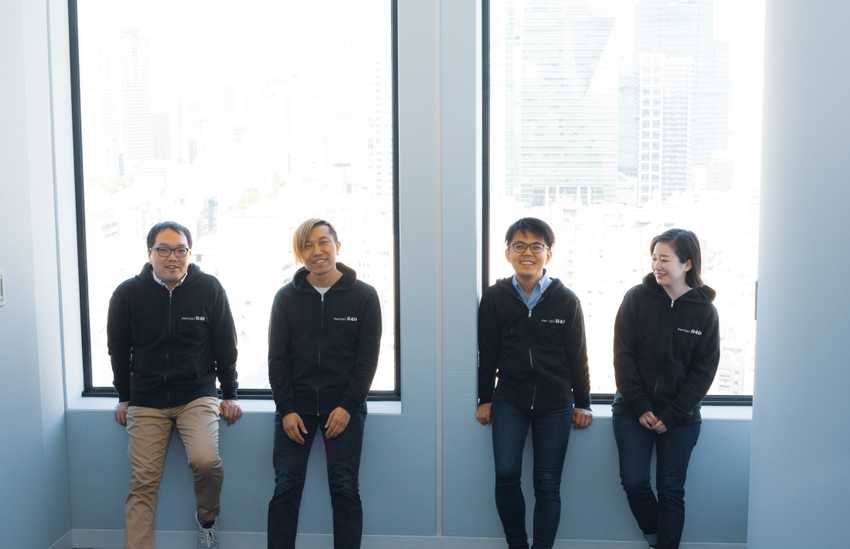 First, I’d like to talk about what makes R4D so interesting.

R4D was established within Mercari in December 2017 as a research and development organization, and from the beginning our goal has been to ”implement our findings in society”. Yes, the name is R4D – the D stands for not just for Development, but also for Design, Deployment, and Disruption.

R4D’s three defining features:
First, each team member is a specialist in their respective field of research. Secondly, we carry out collaborative research with various universities/businesses. Lastly, our research isn’t just theoretical – we aim for practical results that can be implemented in society.

Some of our main fields of research include AI (artificial intelligence), blockchain, VR (virtual reality), AR (augmented reality), and IoT (internet of things). We focus on the latest trends in technology to find ways we can enrich people’s daily lives (in other words, we look for ways to implement these technologies in society).

In this series of posts, I’ll be introducing each of the highly-specialized researchers in the R4D team. This first entry will be focusing on Ryousuke Yamamura, an R4D officer and our team leader.

I used to make car engines…

— Yamachan (Yamamura’s nickname within the team), thanks for joining us! Let’s jump right in with our first question: what were you doing before you joined R4D?

Ryousuke Yamamura (Yamamura): Thanks for having me. After I graduated university, I joined DENSO, where I was working mainly on car engines. Specifically, there’s this fuel injection system for diesel engines called the common rail system, and, at an even smaller level, there’s this component called the injector that injects fuel into the engine and determines the efficiency of fuel consumption and exhaust gas – I helped design that component.

— I don’t think I understood a word you just said! Haha, sorry…but that’s a lot of technical terms… Mind breaking it down for us?

Yamamura: Haha. I guess I did use a lot of words people outside the industry wouldn’t be familiar with.
Fuel is just a liquid on its own, but if you apply strong pressure to it, small particles form.When spraying water from a hose, if you pinch the end, the water droplets get smaller, right?It’s the same principle. The smaller the droplets, the easier they burn, and the less exhaust there is. But in order to make small droplets, you need a certain amount of pressure, and you need to make a device that can withstand that kind of pressure.
On top of that, the injection needs to be done at ultra high speed – 1/100000th (0.00001) of a second. It’s really difficult, but it’s the most important part of a car engine.

The moment I realized what I was meant to do… 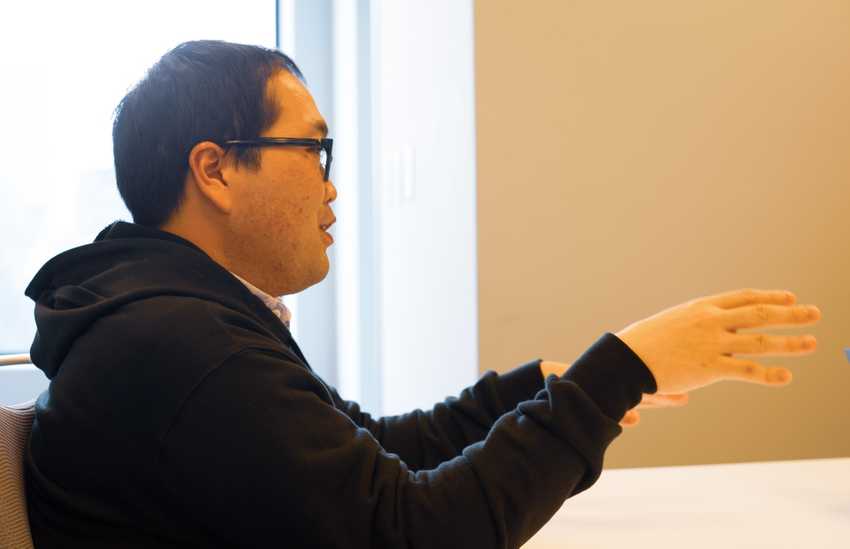 — So why did you start making car engines in the first place? Were you just really interested in cars?

Yamamura: I do think I’m the kind of person that gets absorbed in certain topics, but in this case, it wasn’t that I liked cars or robots or something. If I had to put in words, it’s like I felt a sense of duty to create a sustainable society.

— What do you mean by that?

Yamamura: Do you remember the Amagasaki rail crash on the JR Fukuchiyama Line?

— Of course, that was a tragic accident. It was 13 years ago this year, right?

Yamamura: Yeah. When I was in university, I actually rode the Fukuchiyama Line pretty often, and I usually used the first car. At the time, a lot of students including myself thought that that curve was dangerous due to how tight it was, and that the trains went too fast.

— So basically, a lot of people saw the accident coming.

Yamamura: Yes, but it was still a total shock to see it actually happen. That could have been me in there. 107 people with futures just like me, some of them university students, all lost their lives that day.

Before that, I think I was a little selfish – I always thought about myself first. But after that day, I started thinking seriously about how to create a world without sadness. I went from living for myself to wanting to work for other people. I’ve always liked physics, so there was a part of me that wanted to become a researcher, but my biggest priority was doing something that would make an actual difference for people. I thought to myself, “I want to live a life where I’m able to face the 107 people who died that day.”

— And that was how you got started?

Yamamura: Yes, and the first thing I thought of that could make a difference for people was climate change. DENSO’s vision was “making the most of energy” and “creating exhaust gas cleaner than natural air” – I felt strongly aligned with this mission, and I decided to join the company because I wanted to help reduce CO2 emissions from the front lines. At the same time, I wondered if it was really enough to set my sights on Japan alone. I wasn’t just living one life anymore, I had to live the lives of those 107 people who passed away in Amagasaki, so I felt a strong urge to do something good for the world as a whole. 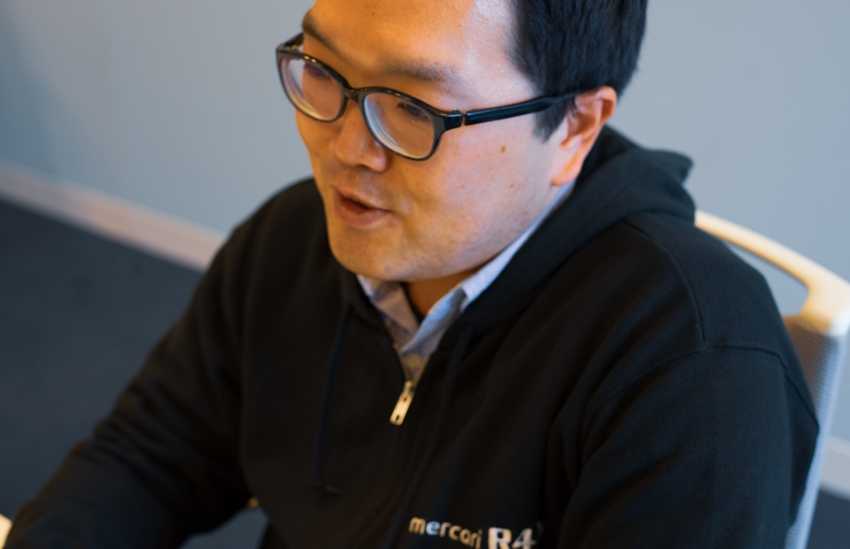 — I can tell you’re really passionate for your work! On a related note, can you tell us what kinds of things you’re usually thinking about as an R4D officer?

Yamamura: R4D is a research and development organization whose goal is to implement the results of our research in society. Personally, I think the most important of the “4Ds” is Disruption. In order to create something new, you have to destroy the systems and values already in place. Basically, R4D is always trying to find out what issues exist in the world so that we can destroy them.

— Can you give us an example?

Yamamura: I think it’s important to consider many different people’s viewpoints. For example, there are so many people in the world today who are suffering. People in developing countries are dying of pollution, while others are in pain from clothing dyed with synthetic fibers. We have to imagine in this way, what exactly is it that makes people unhappy? I may sound a little full of myself, but I’m always thinking of what can be done to solve these problems, and what R4D in particular can do to help.

— Is there anything you’re focusing on now?

Yamamura: There are three things off the top of my head.
The first is that there are 2.5 billion people in the world who don’t have access to clean drinking water. These people have no choice but to use water that may not be safe to drink, and as a result, many children are dying. The hardest part of this is that the water can’t be too clean. If the water is too different from what they normally drink, their bodies won’t be able to accept it. It’s extremely important to see this problem from the standpoint of the people affected.

The second is that 20% of the world’s population doesn’t have access to healthcare services, meaning that one billion people in the world don’t have anyone to help them when they get sick. One problem here is that, in certain places, medical treatment is too expensive to be widespread. If medical equipment were cheaper and easier to use, poorer countries would be able to provide medical treatment as well. ECG machines designed in developed countries, for example, tend to be extremely expensive, while ECG machines designed in India have no unnecessary frills and can be made at a much lower cost. We actually saw these Indian-made machines become popular in developed countries too because of their low cost.

— You mean that unnecessary features on medical equipment can actually cause the cost of treatment to go up?

Yamamura: Exactly. We try to make machines as convenient as possible, but as a result, they sometimes become really inefficient. These are the kind of things I think we need to “destroy”. 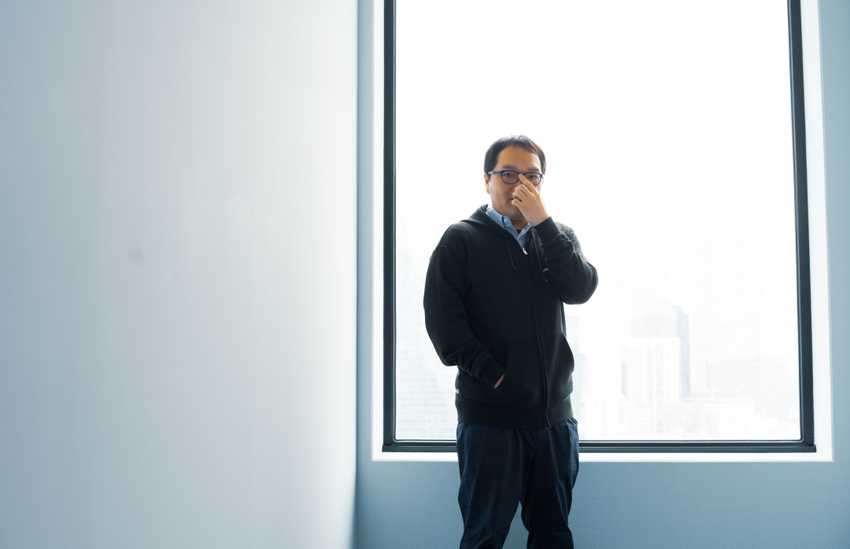 — What’s the third thing you were thinking of?

Yamamura: The most important requirement for a sustainable society is electricity. But even in 2018, there are 1.4 billion people around the world who don’t have access to electricity.

I think the large-scale centralized model of energy is too fragile for an earthquake-prone country like Japan.
If we used what blockchain calls a “decentralized model” and created infrastructure at a local level, we would be able to recover faster from natural disasters.

Creating new infrastructure in areas with none to begin with takes a huge amount of time and money, so if those areas have some sort of natural energy that can be used right away, using that energy is always more effective.
I think society isn’t using natural energy to its full potential yet, so I want R4D to dive into the field of renewable energy as well.

”Freedom” is important for R4D 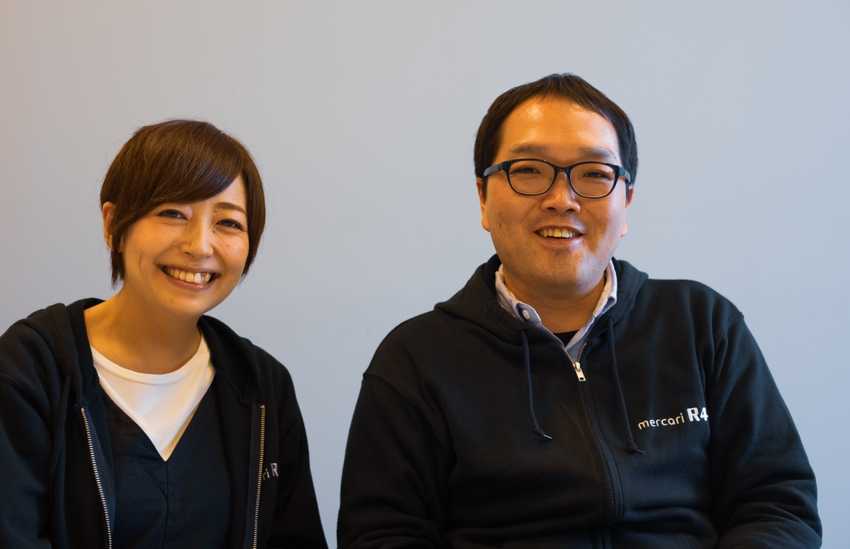 — To wrap things up, what do you think is the most important thing for R4D?

Yamamura: I think the most important thing is that everyone has freedom to do what they want. If team members feel like they’re being held back or that their thoughts aren’t important, that’s not a very good environment to be in. My mission as an officer is to create an environment where everyone in R4D has the freedom to do what they want and to design the future they’re dreaming of. Of course, this freedom comes with a certain responsibility as well, so I want to work with people who are good at driving themselves and who have a clear vision of the future they’re working for. Everyone in R4D is extremely skilled in their own field – I’m specialized in quantum computing and VR, for example – but I’m always learning things about completely unrelated fields from the other members. We’re all adults, but we’re all still learning, and I really enjoy that.

— We’re always looking for partners to help us build the next version of society, whether it be through collaborative research or actually joining R4D.